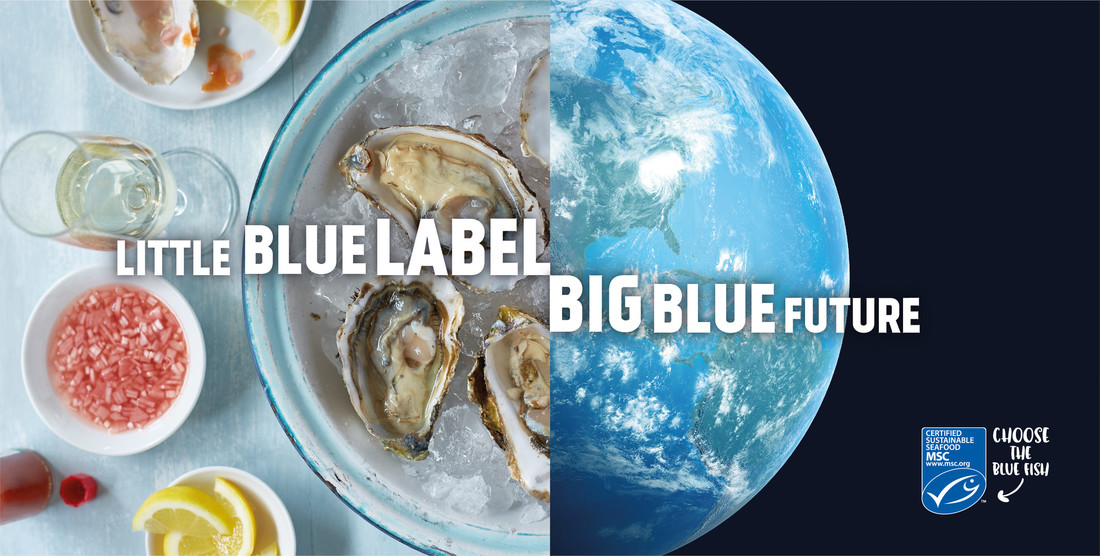 LONDON, 8-Jun-2020 — /EPR FOOD & BEVERAGE NEWS/ — High levels of concern for our oceans are driving a new wave of consumer activism, research for the Marine Stewardship Council reveals, as consumers increasingly ‘vote with their forks’ to safeguard our oceans.

The largest survey of its kind involving more than 20,000 people across 23 countries, conducted by independent insights consultancy, GlobeScan, reveals that 6 in 10 seafood shoppers (58%) already made changes to the way they choose and buy seafood in the last year in order to protect fish in our oceans.

Consumer activism includes switching to brands or products that say they help protect the oceans or fish (23%), buying different seafood species (17%) and changing where they buy seafood (15%). Eight in 10 seafood consumers (83%) are prepared to take further action in the future to safeguard our oceans.

That action is being fuelled by the worry held by nearly 1 in 3 people globally (31%) that their favourite fish won’t be available to eat in 20 years’ time. A higher proportion of 18 to 24-year-olds (37%) fear their favourite fish will be off the menu by 2040 than the over 55s (27%). Young people and parents are also more likely to have taken action in the last year1 and be willing to take action in the future to protect fish and seafood2.

For plenty more fish to be left in the sea, two thirds (65%) of seafood lovers say buying fish and seafood from sustainable sources is vital, and two fifths (41%) say they notice ecolabelled products when shopping.

Oceans contain up to 80 percent of life on earth3, with seafood providing an important source of protein to more than 3 billion people across the world4. However, a third of fisheries around the world have been fished beyond sustainable limits, and a further 60% are fished to their maximum capacity5.

Rupert Howes, Chief Executive at the Marine Stewardship Council said: “With overfishing, climate change and pollution putting increasing pressure on our oceans, the choices we make as consumers have never been more important. This survey shows people really do care where their seafood comes from and how it is sourced.

“At a time when the seafood industry is facing unprecedented challenges as a result of the coronavirus pandemic, we can all play a part in supporting fishers committed to sustainable practises, helping to protect marine ecosystems and safeguarding our seafood supplies for future generations. Choose certified sustainable seafood by looking out for the blue MSC label.”

Brunch meets chopsticks each and every Sunday at Moksa Restaurant. For only $20 dollars between 10am and 3pm, patrons can choose from a buffet of Asian influenced breakfast and lunch items. Moksa puts a twist on your classic brunch with choices such as the Masala Scramble, a chili infused scrambled egg, and the Japanese curried hash brown.

The creative take on brunch tradition does not end with the food. Boston’s Best Mixologist, Noon Inthasuwan-Summers, has crafted a selection of $4.50 brunch cocktails in recognition of Moksa’s location at 450 Mass Ave. The Mi-Moksa replaces the Mimosa’s orange juice and champagne with bubbly sake and grapefruit juice, while the Sake Mary is exactly what its name suggests, a Bloody Mary with Sake.

To Celebrate the Chinese New Year on February 10th, Moksa will be adding a few more treats to its Asian brunch. You can expect to see dragon dancers as you dine and the first 20 people to make reservations on www.moksarestaurant.com will receive a red envelope upon arrival to try out their New Year’s luck. Only a select few of the red envelopes will be winners, so get out your good luck charms.

The Co-operative Group has been ranked top in the Marine Conservation Society’s (MCS) Supermarket Survey 2011, scoring 84% and earning a gold award for sustainable seafood.

As one of the most sustainable seafood retailers in the UK, The Co-operative was praised for its product labelling, Responsible Fish Sourcing Policy and sustainability initiatives.

The retailer doesn’t sell any of the products identified by MCS’s “Fish to Avoid” list and all its own-brand tuna is now caught using the pole and line method. Pole and line fishing is a more selective fishing method which results in less by-catch*, which reduces the impact of fishing on the biodiversity of a region.

According to The Co-operative Ethical Consumerism Report, which is published this week (Thursday 15 December), last year, UK sales of fish from sustainable sources grew 16.3 per cent, from £178m to £207m, twice the rate for total fish sales which increased 8.2 per cent.

The Co-operative Food’s Responsible Fish Sourcing Policy governs the sourcing of all its own-brand wild and farmed seafood including all food products, which contain fish, from ready meals to sandwiches. Each own-brand product is assessed to confirm the source is a responsible fishery, examining the individual species based on fishery location and method of catch; species’ resilience to fishing; by-catch estimates and whether species are endangered.

In 1998, The Co-operative was one of the first organisations to register support for the Marine Stewardship Council and has continued to work closely with them to promote responsible, environmentally friendly fishing practices.

Since then, The Co-operative has provided £200,000 to support UK fisheries to pursue Marine Stewardship Council certification. To date, 12 UK fisheries have benefited from this fund, including the entire Sussex inshore fishery comprising of 26 fisheries.

In 2009, the retailer supported the MCS’s Marine Reserves Now! campaign to lobby to adopt a policy manifesto commitment for 30% of UK waters to be Highly Protected Marine Reserves by 2020.

More recently, The Co-operative joined the battle to save the European eel with an innovative river navigation scheme designed to reverse the dramatic decline in eel numbers. Together with its partner The Rivers Trust, The Co-operative is building specially-designed passes, enabling eels to navigate physical barriers such as dams, weirs and flood defences which prevent them from reaching the slow-moving, upstream waters they require to grow to maturity.

In light of its work with UK fisheries, The Co-operative was also highly commended by MCS for the Best Sustainability Initiative.

Jumeirah Restaurants, the dedicated branded restaurant division within the Jumeirah Group, has signed a license agreement in Australia with Emirates Leisure Retail (ELR), a subsidiary of the Emirates Group.

The agreement signed by Gerald Lawless, Executive Chairman of Jumeirah Group, and Gary Chapman, President Group Services and Dnata for Emirates Group, will see the expansion of The Noodle House brand in Australia, with the first outlet opening at Southbank in Melbourne, October 2009.

Already a popular choice for diners in Dubai, Abu Dhabi, Muscat, Riyadh, Kuwait and Doha, The Noodle House restaurant provides a unique combination of wholesome food and energetic ambience. Inspired by the food and nightlife of exciting South East Asian cities such as Hong Kong, Shanghai, Bangkok, and Jakarta, The Noodle House offers Asian delicacies in an informal yet stylish setting.

Phil Broad, Managing Director of Jumeirah Restaurants, said: “We are excited to be working with ELR on the opening of The Noodle House in Australia. ELR are already our partners in Abu Dhabi and Muscat and it is a pleasure to continue our great business relations by entering a new and exciting part of the world.”

Richard Hollands, Chief Executive Officer, Emirates Leisure Retail LLC, said: “We are pleased with our plans to launch The Noodle House this year at Melbourne’s premier entertainment precinct, Southbank. Our announcement today marks a new chapter with the Jumeirah Group that builds upon the successes of our partnerships in the UAE.”

The signing follows the recent openings of The Noodle House outlets in Kuwait, Riyadh and Doha.

Waitrose has announced the launch of their new range of seasonal fine foods with something to suit all tastes and budgets.

As the credit crunch drives the appeal for home entertaining and dining, those watching the pennies this festive period can still enjoy the finest foods with the fresh party collection from Waitrose.

The new range offers an exciting collection of 38 contemporary canapés, with something to suit all tastes.

This latest range includes bite-sized classics from around the world, such as traditional styled classics with British recipes like Mini Beef Wellingtons, and Mini Yorkshire Puddings filled with beef, onion relish and crème fraîche with horseradish and mustard.

The Mediterranean collection includes Scallop and Chorizo Skewers, which are hand-made with slices of spicy Spanish chorizo and succulent scallops, marinated with roasted peppers, Sunblush tomato paste and parsley. Other Mediterranean favourites include the ever popular Brie and Cranberry Parcels, as well as Mushroom and Mascarpone Cups, Mini Bruschettas and Lamb Koftas.

The Oriental flavours which are on offer include Mini Salmon Fishcakes with a garlic and ginger dip, Mini Duck Spring Rolls, Spiced Chicken and Cashew Cakes and Paper Prawns.

The new Christmas recipes party food collection will be available in Waitrose branches from November 17th ensuring anyone can lay on an impressive buffet spread for their New Year’s celebration with minimum effort.

All items are suitable for home-freezing too, so they can keep be kept in the freezer through Christmas and into the New Year, and of course all come with the assurance that they are made with the highest quality ingredients.

The new party food collection will be available in Waitrose branches from November 17th About Waitrose Waitrose has 191 branches in its estate including stores in Wales and Scotland and has just been named Britain’s Best High Street Retailer at the Which? Awards 2008 and Supermarket of the Year by the RSPCA at its Good Business Awards in 2008. The food shop has won more major wine awards than any other retailer and was named Supermarket of the Year 2007 at the Decanter World Wine Awards.

Waitrose sells over 1,700 organic products, over 60 different types of fish and seafood and more than 100 different cheeses. The food shop also enjoys one of the best reputations for dealing with farmers and suppliers

EPR Food & Beverage News is a new blog, part of EPR Network, that is going to be focused on and will be covering the food & beverage news and stories from press releases published on EPR Network.

EPR Network (EPR stands for express press release) is one of the nation’s largest press release distribution networks on Web. The EPR’s nationwide network includes 12 State based PR sites, one major PR forum and a number of industry specific PR blogs and what started as a hobby on Internet years ago turned out to be a rapidly growing business today. EPR Network is also known as one of the most trusted (human optimized, published, edited and monitored, spam/scam/low quality PR content free) PR sites on the web with more than 10,000 company and individual press releases distributed per month. EPR Network is putting your press releases on top of all major search engines’ results and is reaching thousands of individuals, companies, PR specialists, media professionals, bloggers and journalists every day.

EPR Network has thousands of clients around the world including global 500 corporations like Hilton Hotels, Barclays Bank, AXA Insurance, Tesco UK, eBay/Skype, Emirates, just to name a few. The network’s PR web sites are currently reaching from 150,000 to sometimes 500,000 unique visitors per month while our viral reach could possibly go to as much as 1M people per month through our presence across various social media sites. EPR Network was established in 2004 and as of May 2008 it had more than 800,000 press releases (pages) published on its network.