Los Angeles, CA, 2016-Apr-03 — /EPR FOOD & BEVERAGE NEWS/ — The ArtBrew beer brewing control system – designed, developed and marketed by an international-based team comprised of the world’s top engineers and brewers – has been officially launched at Kickstarter as an “inspired innovation” that will “change the concept of beer brewing.”

As of this writing, ArtBrew’s Kickstarter campaign has already got full funded within two days of being activated. And it will arrive at 200% of target very soon.

Boasting a premium structure that keeps both brewing and fermentation in one chassis and which automates nearly the entire process, the ArtBrew is the world’s newest, smartest beer brewing appliance featuring a unique mobile app that provides users another way to control the machine beyond the button on the 400 x 240 pixels LCD screen, either nearby or remotely with a Wi-Fi connection. This also allows for status tracking and access to a massive database containing a plethora of recipes from across the world.

Through ArtBrew’s innovative app, users can customize their own recipes while taking advantage of the social networking platform to obtain and share recipes they may not have had previous access to.

“The ArtBrew solution is going to change the brewing game not only because of its ability to keep the brewing tank and fermentation tank in one common chassis – one that boasts excellent structural design – but also because it’s a formidable control system with a myriad of sensors to control and provide feedback on the different processes,” states an ArtBrew spokesperson.

“What’s more, in this day and age of worldwide social networking, the ArtBrew app provides users an alternative control method for the machine, coming fully loaded with a recipe library that contains hundreds of recipes collected from the world’s most famous breweries, access to brewing process tracking with a real time curve, market access to all ArtBrew products and accessories, user notification of machine status and much more. To say the ArtBrew product is a forward-thinking, easy-to-use brewing solution is something of an understatement.”

A six-liter MiniKeg can represent a serving keg that the user simply leaves inside the machine to access the beer, or can work as a fermentation keg which the user can store in a refrigerator for fermentation purposes. Further, ArtBrew recipes are sorted in various categories, providing the user an easy way of finding the desired recipes while allowing the search process to commence by keyword or name. Users can create their own recipes and can also change or modify the original ArtBrew recipes to create a new one, free to then use/brew them or share with the public. 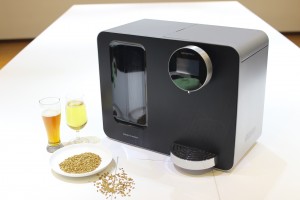