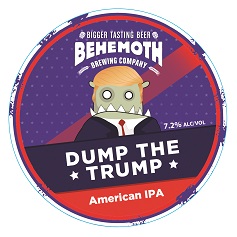 Behemoth came to global prominence last year when it brewed the afore mentioned Dump the Trump, an American style IPA. It followed this beer up with another brew designed to rile the US President, a peach sour called Im-Peach-ment.

When Behemoth brewed the latest batch of Dump the Trump in May 2018, it managed to get them trolled by US right-wing internet warriors. The Behemoth facebook page received hundreds of bad reviews and comments within a few hours.

The trolling made News headlines in New Zealand and soon after the New Zealand public rose to the defence of Behemoth, pushed the average review score back up and gave the hardliners a taste of the Kiwi sense of humour with some classic parochial responses to the nasty comments.

Ironically the publicity that the Trump-o-philes inadvertently created proved a catalyst for growth for the Behemoth beers. In the last year, their revenues grew by 136%, and they now export to 11 countries over the world.

The investment campaign which is currently live is open to qualified overseas investors and runs alongside a New Zealand only equity crowdfunding campaign. Since they went live on Thursday afternoon, the campaigns have already raised more than $800k in investment, halfway to the minimum amount required to close the combined offers.

Andrew Childs, Founder of Behemoth, said “The campaigns are going along well. We have had several qualified investors put in significant amounts so far, including one investor putting in $100k. We have some big plans for the future and are looking forward to welcoming new shareholders on our beery adventures. It would be great if we could get a few significant overseas investors, especially given we are now exporting all over the world.”

The campaign will run for the next month, or until fully subscribed. Qualified overseas investors can follow this link to find out more information and download the Information Memorandum:
https://www.pledgeme.co.nz/investments/362-behemoth-brewing-wholesale