Florida recording artists Robin And The Giant have begun an informal campaign to recommend that the State Of Florida embrace the idea of declaring an official “state sandwich.” The idea stemmed from a radio conversation on NewsTalk 1370 WOCA, in Ocala, FL, when the morning-drive duo read that legislation was introduced in Massachusetts to make the “Fluffernutter” the official sandwich of the commonwealth. For those of you from outside of New England, a “Fluffernutter” is a simple sandwich composed of 2 slices of bread, peanut butter and Marshmallow Fluff. 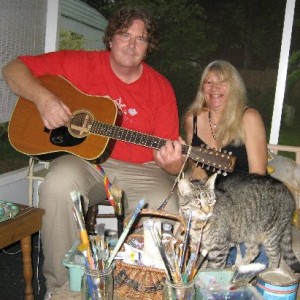 Listeners called the radio program to offer their own suggestions for the official Florida sandwich which included the Gator Burger, the Cuban Sandwich, the Barbecue Pork Sandwich, and the Peanut Butter And Jelly sandwich because of the large number of peanut farms in the state. Robin And The Giant say if you’d like to suggest a sandwich you can log onto their website at www.RobinAndTheGiant.com and enter your suggestion onto their “Guest” page.

While not a serious issue, it wouldn’t be the first time an official food made it to the Tallahassee think-tanks. Back in 2006, the Florida Senate passed a bill making Key Lime Pie the official state pie. Earlier that year, there had been some discussion that pecan pie should be the state pie, given the large number of pecan farms in the state.

Robin And The Giant have been a Florida based musical duo since 1988. Last year the duo released the song “To Infinity” which told the story, in ballad form, of the miraculous story of survival of Walter Marino and his 13-year-old son Christopher who were rescued after treading water in open ocean off the coast of Florida without lifejackets for 12 hours.